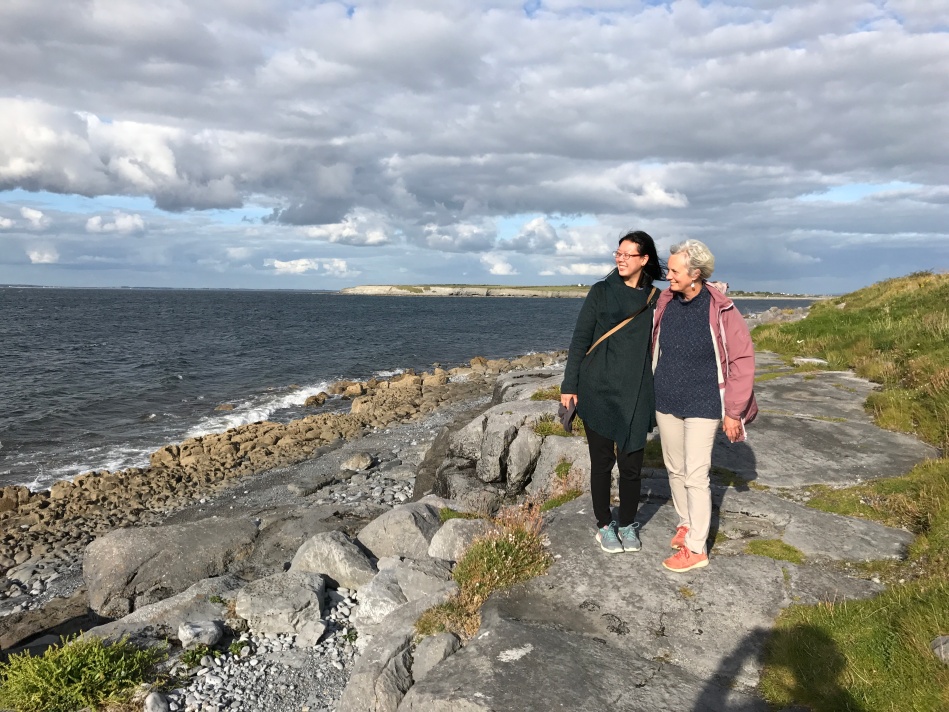 When I first set foot on Burren National Park, the lack of artificial structures stunned me. It looked liked a wild land, an open space that looks forgotten; but in fact it is very busy living and growing, doing what nature does. During the past decade living in the United States, I understood the definition of “national parks” to be open spaces for the general public to enjoy: Informative signs, visitor centers, and thoughtfully laid oud paths and amenities are important for the people to enjoy, making “people” really a dominant part in this definition.

In the Burren, I saw minimum signage. There would be a small dark brown wooden sign low near the rocks behind bushes, easily overlooked. There are very few concrete or wooden construction paths. Every direction looks the same to me: trees, bushes, limestones. If I were there alone, I’ll get lost right away. This made me believe that locals probably navigate natural environments as if they were the signs.

The Burren and nearby heritage sites are also not as heavily marketed as it could be, making these sites relatively secluded, unknown, and possibly under-appreciated. A friend heard this, shook his head, and said, if the place is beautiful or important, it should be made known so that people can learn and appreciate it.

But does a living ecosystem need our recognition and approval? Do we need visitors to prove the worthiness of a land?

With so little artificial footprint in the park, nature is given a much louder voice and even an “authority” on how things should work. Instead of letting humans leading the way and doing the talking and thinking, a “wild” park like what I’ve experienced in the Burren seems a much more equal conversation if the goal was to listen, learn and appreciate.

I came to Ireland in search of a natural experience beyond the visible: something emotional, spiritual, and mythological. I might have come to hear the land speak for itself, and build my own relationship with it through our interaction. It took years of connecting remotely before I got to meet Éire in person—or, before it made sense to meet in person.

Unlike Irish Americans, I have no roots in Ireland. However, the call to connect spiritually with the nature in Ireland as well as Celtic myths and fairy lores has grown so intense that I would describe it as some other type of root. It developed naturally. I grew up in Taiwan, where presentations of Celtic and Irish culture was almost non-existent. In the school library, there was one Celtic folklore anthology with a gray cover showing shadows of a celtic cross ruin in the mists, and it had stories that didn’t make sense (like many folk tales). It left an impression. Then every few years, something would enter my life that would later prove to be an aspect of the Celtic nature-spirituality. The sylphs and elementals in Baldur’s Gate video game. Poetry and reference of “twilight” in an anime series. The notion of earth-based spirituality and terms like paganism. The land and sovereignty as a goddess. That elemental magic can be felt from interacting with nature, and that they’re not just symbols and ideas. That you can be a poet and a mystic, patriot and activist all at once. In my mind and in Yeats’ works, nature, culture and spirituality is inseparable from Irish Celtic culture.

These experiences added up and pointed me to Ireland, and they told me to visit with an open mind about what the land of fairy folks is like. I found myself in a series of turlough-exploring, wildflower-appreciating, tree meditating and townspeople greeting with Jackie, my tour guide based in Gort.

I wasn’t sure which part of Ireland to explore, and Jackie immediately offered her knowledge and enthusiasm about the Burren. With old limestones and karst landscape, prehistoric sites and the rich mythology alive in these lands, the Burren has significant geographic, archaeological and mythological importance—perhaps only to locals and professionals, I thought, because it’s not touted on international tourism websites. Once in the Burren, there proved to be no fellow tourists, no OPW heritage badges of honor, no sites to name drop that would make my friends excitedly inquire. We drove and walked and climbed, tiny in the vast landscape. Everything from the mellow limestone hills to the hidden dolmens, holy wells and turloughs is as low-key as can be, insignificant to the undiscerned eye, unable to locate by those of us who travel by street numbers and Google Map navigation, unattainable by the car-less travelers, neglect-able to those who are waiting to dazzled and impressed by sight. It is, in fact, the most valuable type of travel we can ask for, to simply spend time with a place, so that we relax from the anxious traveler’s goal of astonishing discoveries and fit into the tempo of the destination and breathe in its pace. Jackie brought me to sit on the grass to meditate, attune to trees with sounds and instruments, identify trees and butterflies, and observe qualities of the local ecosystem. To a visitor like me, the land was opening up a lot. Compared to agency day tours, this is travel without highlights that won’t get likes on Instagram. However, the place itself has so much time and space to speak, the opportunity is incredibly valuable and magical.

I told closer friends I wanted to visit Ireland to look for fairies, which is a metaphor for this kind of slow travel. As a traveler, I’m programmed to search proof for things I’ve read about. But no destination is merely a proof. The land is alive, including the people.

Travelers talk a lot about our destinations, but voices of the locals receiving travelers is rarely heard. If one merit of traveling is to increase compassion and raise collective consciousness, the locals play a key role. It’s one thing that my dream trip to Ireland included sightseeing staples like Galway pubs, Temple Bar, Connemara, Boyne Valley tours and Sligo pilgrimages. It’s another when a traveler begin to care about the local weather, local news, the impact of tourism and local concerns of an area that is not her home. I began to feel this way for the town of Gort and the Burren area as the people did their (your) magic on me, especially Jackie from Earthwise Tours. Her enthusiasm in the land she lives in rubbed off on me like delightful wildflowers seeding across a barren land.

Upon meeting her, I was immediately amazed by her curiosity and agility to explore and the passion to share experiences in nature with a stranger. We were soon exploring places from natural science, mythology, spiritual and literary aspects. I was ignorant about plants, geology, and local history, therefore not as excited as she was when noting wildflower peeking out of the limestones after the rain or as amused by elderflower growing out in the back of a dolmen. So many details, even those that locals might overlook, was full of information and meaning to her. While the amount of information overflowed my brain capacity, I ended up the most amazed by how her passion and curiosity passed down to me quite naturally. I met her personal friends, chatted about how businesses, lands and trees are doing, and just like meeting lands, dissolved into their everyday pace and concerns. This added so much grounding and depth to the beauty and excitement that a traveler paints on a mystical destination. The connection becomes much more than finding proof to the influences that led me here; it became an intertwined connection of people, nature, heritage and evolving consciousness.

While in Ennis, I came across a picture book “What to Do and Not to Do When You Visit The Burren, the World and at Home”, which is about being a responsible traveler and a citizen and a human being in an ecosystem. I finished the book and was really glad that as a tourist, I could hear local opinions about local tourism. It also made me smile that the names and descriptions of places in the book had personal meaning to me, making me feel like an ambassador for slow travel in Gort, in the Burren, and in Ireland. An ambassador between traveler and local resident identities, between my American, Taiwanese and fan-of-Ireland identities, between tourist and conscious slow-traveler identities, between nature-appreciating and nature-communing identities.

Ever since my first trip to Ireland, I developed a ritual to stay conscious and aware. At places I visit, I take a quiet moment to speak to the land, hoping to keep alive the respect and rich connections with nature that I have felt in Ireland: “I came to see you, now we are connected. You are now a part of me, and I leave myself to be a part of you. Together we grow, and as a human I will work hard to bring back balance and respects for nature.”

1 comment on “Across Two Seas to the Burren, Ireland (Originally published in Otherwise Ireland)”